The Kawasaki Disease Foundation Australia Inc grew from humble beginnings when a number of parents connected following the Herald Sun newspaper in Melbourne publishing a newspaper article in 2002 about Kawasaki Disease.

With a shared quest to raise greater community knowledge of Kawasaki Disease, the combined effort of two parents led to the Foundation gaining its status as an Incorporated organisation in 2007.

From that point on, the Foundation continued to establish itself as an Association to support Kawasaki Disease patients, their parents/carers, families and the community. The Foundation was successful in being recognised as a charitable group and is licenced to fundraise in various States/Territories across Australia and registered with the Australia Charities and Not-For-Profit Commission 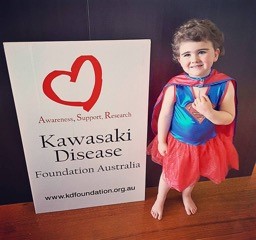