Shirley is a founding member of our organisation and has represented the Foundation at the last two International Kawasaki Disease Symposiums. Shirley has been instrumental in providing support to other families affected by Kawasaki Disease, organising community events and information sessions, as well as establishing stakeholder relationships with key medical and research specialists, and Kawasaki Disease organisations across the globe.

Her son Cam (now a KD adult and general committee member) was diagnosed with Kawasaki Disease over the Christmas break in 1994/95 when there was virtually no knowledge of Kawasaki Disease in Australia. As Cam acquired heart damage from the illness, Shirley’s personal experience gives her valuable insight and empathy into the challenges that come along with being a parent of a “Heart Kid” and drives her passion for Kawasaki Disease awareness.

Shirley is a trained Primary School Teacher with extensive experience volunteering and coordinating major events for a variety of community groups and not for profit organisations. 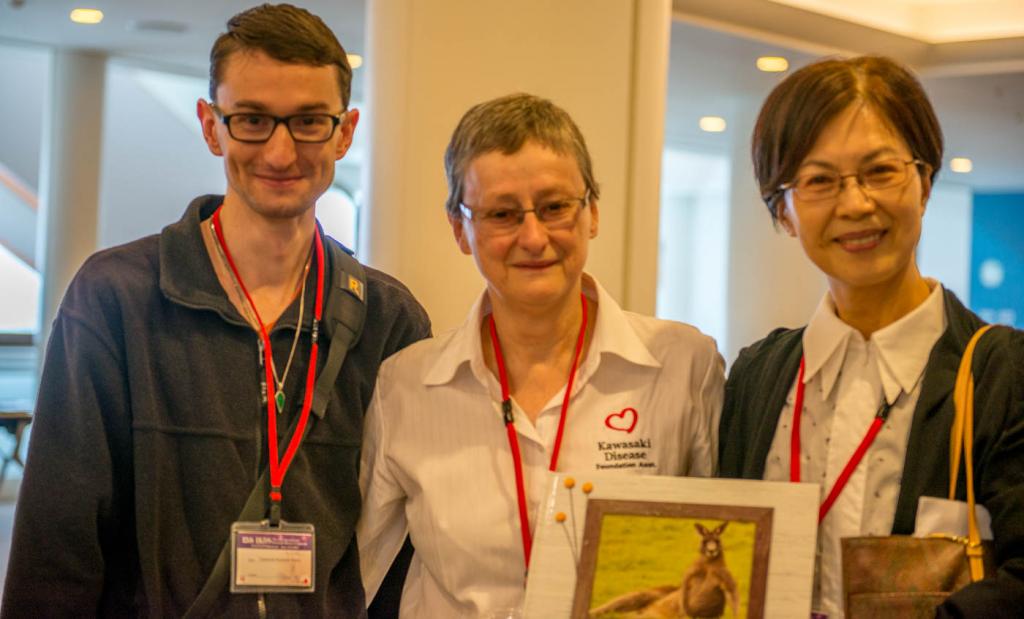 Little did we know in 1994 when we travelled from Melbourne to the country for a family Christmas how our lives were about to be turned upside down. Cameron (Cam) was 7 when he was diagnosed with KD- outside what is considered the normal age range. Today we are hearing of more older children being diagnosed.

Christmas Day was uneventful but on Boxing Day Cam woke up with a stiff neck which we put down to sleeping on a different pillow. Later that day he developed a temperature and was not himself. The following day we managed to see my father’s GP who thought it might be Glandular fever. We headed back to Melbourne and the next day visited out GP. Christmas was not a good time to get sick, as doctors, specialists and allied services tended to go on holidays – hopefully it is a bit better 25 years later.

Over the next week we saw more doctors, including a paediatrician. Cam’s stiff neck persisted throughout and his temperature continued to rise and fall. He had a mild rash on his stomach for a few hours, but by the time we left our GP’s office up to the time we saw the paediatrician at a local hospital a few hours later, it had gone. He also had a very sore mouth. The paediatrician did think about hospitalising him for the weekend, as at that time he couldn’t even keep Panadol down, but as it was the end of the year, decided against it. They all thought it was a virus which would improve.

I will always remember being up all New Year’s Eve, but we weren’t celebrating. I finally went back to our GP, mainly because his stiff neck was not improving, and he was so lethargic and not eating. The GP sent away for blood tests and rang us at 10 pm that night to say that Cam was indeed very ill. The next day was spent in the ER at the Royal Children’s Hospital where Cam was seen by a number of doctors and underwent numerous tests including a Lumbar puncture which was awful to watch him go through. I remember Meningitis, Glandular fever, Scarlet fever, Leukaemia, among other possibilities being mentioned. At one stage, a paediatrician (we will forever be in his debt) did briefly mention Kawasaki Disease. We were finally admitted to the ward very late that night.

For the next few days, Cam was only on Panadol as it was thought he would overcome this virus. He spent his seventh birthday in hospital but was very unwell and totally miserable. We were eventually told that we could go home but the paediatrician asked to do one last test- an Echo. I’ll never forget the panic I felt as he was rushed from there for an ECG. At that point the cardiologist asked me how long his fingers had been peeling- very mild at this stage. I also remembered afterwards how he had been very sensitive to light. I realised then that something major was wrong, but a heart problem still didn’t register. My father had a bypass but back then there was very little awareness of heart conditions in children. Back at the ward I spent a few hours in tears before the paediatrician came to explain that Cam had Kawasaki Disease, which in his case, had left him with a very large aneurysm in his left coronary artery. He was shocked at this discovery as he had only done the Echo ‘just in case’. He explained that Cam was what they called ‘Atypical’ (now also referred to as ‘incomplete’), which meant he didn’t display all the usual symptoms. Although it was well past the 10-day window to administer IVIG they went ahead in the hope it would bring down his temperature. This was the turning point in his recovery. 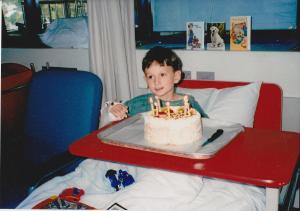 After 10 days at the RCH we were finally discharged with instructions to learn CPR (not easy back then) and told they hoped we wouldn’t need to return before out appointment in 2 days – not very reassuring! At this point he was on 2 medications. The next 2 months saw us back at the hospital every few days for monitoring. Sometime in March an Echo picked up what was thought to be a blood clot forming so he was put on Warfarin which he was on for 7 years. This involved regular blood tests to ensure his INR levels were adequate. The period from March to May 1995 saw us visiting the hospital for regular cardiology appointments. During this time, they consulted with colleagues both overseas (Japan and the US) and in Australia. In May a catheter procedure was performed which luckily showed there was no damage to any other part of his heart. Initially Cam was on very restricted physical activity which was lifted after 9 months. However, contact sports were off the agenda due to the increased risk of bleeding and bruising.

The next 7 years involved numerous doctors and hospital appointments and tests. Fast forward to December 2001 and an annual Nuclear Scan showed changes, so an urgent angiogram (catheter)was performed which showed the artery on either side of the aneurysm was virtual completely blocked. They were amazed he hadn’t been having angina attacks etc. Initially they were hoping to be able to insert a stent, but this was not possible. Urgent bypass surgery was recommended – the sort the RCH doctors hadn’t done before. We had to decide between the RCH and doctors and staff we knew in a familiar setting or surgery at an adult hospital with surgeons whose regular patients were not children. In the end we decided to have it done at the adult hospital- it was a learning experience for their staff! This was successfully done in January 2002 – I made sure it was at least after his 14th birthday.

The aneurysm was virtually calcified and too dangerous to move so it was bypassed. It was a learning curve for the surgeon as he had never performed surgery on someone so young (made more difficult by the fact Cam was always a small, thin, child). Afterwards the staff weren’t sure of the best way to care for him during his recovery. I remember one day being shocked to find his room full of doctors. The surgeon explained afterwards it was a case of the paediatric staff wanting to do things one way and the adult staff, another. Cam had other ideas and refused to eat no matter how hard they tried with treats they specially organised for him. Hence on day 4 after his surgery he was discharged into my care – the last thing I was ready for. He wasn’t allowed to return to school for 3 months which unfortunately meant he missed the important first term at Secondary School. His way of coping /dealing with all the trauma over these 9 years was to totally block everything out – I’ve since been told by a number of nursing friends that this is often the case with people who have experienced major trauma/illness. It makes me sad to know he has very little memory of his first 15 years of life. This also was a major hurdle in getting him through school and into the workforce.

Eighteen years later, while everything is stable, he is still on 2 yearly monitoring. More surgery will be required at some stage, but again this is part of the unknown of our KD journey. Twenty-six years ago, KD was virtually unknown in Australia. We were very much alone. I found myself trying to explain the condition to medical professionals, as well as school teachers, etc – in fact everyone in general! Gradually over time I managed to source information for myself from overseas and build up a network of KD parents and contacts, both here and overseas. Things are so much easier today with social media and modern technology and there is a lot more awareness today, but we still have a long way to go.