Brian and Nidal joined the KD Foundation in 2009 after their son Kareem was diagnosed with Kawasaki Disease in September 2008 and after they attended the parent symposium in Melbourne the following year.

Nidal became the parent support Co-Coordinator for South Australia and since then Brian and Nidal have held many fundraising events along with raising awareness about KD.

Nidal is an interpreter and works for different agencies and is so passionate about helping parents who are experiencing some difficult times with KD.

It all started on the 16th of September 2008. My 7 year old son Kareem complained of a stomach ache and he had a temperature of 38.1. The earliest appointment I could get with the doctor was on Saturday 20th. He said it was a viral infection and I was doing the right thing. That night he had a scrotum pain and it got worse so I decided to take him to the E.D in the Women and Children’s hospital. After waiting 4 hours the doctor ordered a stomach X-Ray only to find out Kareem was constipated. An enema fixed this problem but the pain in the scrotum didn’t go away. After further examination I was told it was a virus and sent home.

Monday he got worse (6 days of temp) and by Wednesday he was very weak, tired and miserable (he broke my heart). After examination our doctor couldn’t explain the inflammation in the scrotum and advised to go back to the hospital thinking it could be the appendix. At the ED they illuminated the appendix and took a swab thinking that it might be the streptococcus bacteria and sent me home with antibiotics. He started the medication but now he had diarrhoea and vomiting on top of everything else. The doctor from the hospital rang to let me know that the swab was negative. I decided to take him back to the hospital so arranged for my daughters to go to family and called an ambulance. By this stage I was ready to strangle someone….I asked to be seen by a surgeon who suggested that the scrotum looked abnormal and Kareem might have twisted testicles and best to do surgery to confirm this.

It took 6 doctors and a surgeon to finally admit Kareem to hospital. My heart sank. We were freaking out. Next morning (26th) Kareem had surgery (it was the longest 2 hours in my life) only to find the testicles were fine (thank god) but they still didn’t know the reason for all the fever. 3 days after surgery with antibiotics giving intravenously and panadol every 4 hours he was getting worse. By now he had red lips, strawberry tongue and blood red eyes and the team of surgeons decided to put him in the hands of the medical team. The medical team were puzzled and ordered blood tests culture, chest X-ray, ultra sound for the kidneys and other blood tests. Nothing showed up except the CRP level in his blood was very high – 300. One senior doctor came to me and said “we don’t know what’s going on with Kareem”. He showered me with a 100 questions but I managed to answer every single one. He decided to do an ECHO for the heart thinking that it might be KAWASAKI DISEASE (I was thinking what is that – I had never in my life heard about it). I went in this dark room with him trying to hide my tears – thinking – NOTHING is going to be wrong with his arteries. After half an hour the cardiologist came to go through the ECHO with me only to tell me that both coronary arteries looked abnormal and it does look like KD but they are not sure because he didn’t have all the symptoms. I couldn’t breathe but kept my brave face thinking of Kareem’s reaction if I did something stupid. KAWASAKI – what the hell is that? 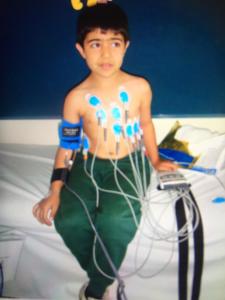 They started the Gamma Globulin that day with a high dose of aspirin (600mg). Kareem got very sick that day, he couldn’t tolerate noise, light and was screaming and carrying on to everyone except me. We had the medical team, cardiologist team and the rheumatologist all looking after him. First dose of IVIG worked for a few hours but then his temp. was 40 degrees again. The next morning they gave him another course. Then his fingers and toes started peeling and they confirmed he had resistance Kawasaki. His temp dropped and we went home after 24 hours. Temp. went up again so back to hospital for more tests – blood culture, blood tests, abdominal CT scan, bone scan – they decided to put him on steroids. All tests came back negative except the CRP. After steroids were started his temp broke and he started eating like crazy. They did an ECHO to find the aneurysms had gotten bigger (my god what is next-when is this nightmare going to end?). We were sent home again but 24 hours later back in hospital again with a temp. 5 days later after more steroids inflammation and temp. up again. The rheumatologist gave us 2 options 1) to keep him on steroids for a longer period of time or 2) give him an infusion of Infliximab. We had never been so confused in our lives, and my husband and I were crying. After discussing all the pros and cons with the Rheumatologist, we put all our trust in god and her and decided to go with infliximab (despite the risks).

We were moved next to the nurses’ station and the intensive care unit was notified in case Kareem had an allergic reaction to the medication. We just waited there speechless looking at everyone trying to do their jobs I can’t explain how we felt – but I know deep down we were scared to death. Finally after 2 hours Kareem was feeling well and next day his blood test showed his CRP was 0 – a miracle. They kept us in hospital for another 2 days then we were allowed home after staying 6 weeks in hospital. Kareem has to see his cardiologist on a regular basis and he is on warfarin and aspirin. His coronary arteries had gotten worse – an angiogram showed that the RCA has a giant aneurysm (8mm) and the LCA has 3 aneurysms (one is 5mm). We don’t know what the future holds for him but one thing we know for sure is we do love him to death. Kareem is the strongest person we know, we are so blessed to have him in our lives – we believe that he is a miracle child. He is such a young person with a giant problem and huge ambitions – he wants to be a cardiologist when he grows up! I pray to god every minute that his dream will come true.

It has been 12 years since Kareem was diagnosed with Kawasaki Disease and was left with giant aneurysms to both coronary arteries. I am happy to say that he is doing well… it has being an amazing journey. Through the 12 years he has continued to do well at school, high school and 2020 began university.

He was forbidden from playing any form of contact sport because of blood thinners.There were, and still are, Cardiology visits, a few angiograms, a good number of echoes, stress tests, ECGs and the countless number of blood test that he had to do when he was on warfarin and aspirin. After a few years on this medication the hematologist decided to change the warfarin to Clopidagril ( 35mg) which is another blood thinner but works on the platelets and doesn’t require ongoing blood tests. When Kareem reached high school he was still doing well with his stress test so his cardiologist allowed him to play play soccer but with restrictions. Kareem was over the moon. In 2019 he played soccer for a club, for our community and 2020 has tried out for one of the university teams.

Kareem turned 18 in June 2019 so we had to do the transition from the Womans and Children’s Hospital to the Royal Adelaide Hospital. We have had 2 visits so far, an MRI scan and 2 CT Scans that showed some calcification of a blood clot and some cholesterol build up. His new cardiologist decided to trial a new blood thinner Xarelto and told us it will be good for Kareem to start on a low dose of cholesterol tablets -Rosuvastatin.

Now he is studying a Bachelor Of Science Advance with Honour at Adelaide University…Couldn’t be prouder.

We send our prayers, love and hope to all the families that are going through what we have been through so far with this.

There is light at the end of the tunnel.